The purpose of our Association is to promote and foster friendship between the people of Ealing and Marcq-en-Baroeul, a commune in Lille Métropole in the Nord-Pas-de-Calais region of Northern France. Our counterpart in Marcq-en-Baroeul is Les Amis d’Ealing.

More commonly known as “Friends of Marcq”, the Friends of Marcq-en-Baroeul was founded in 1987. Since 1991 it has been Ealing’s official French twinning association, when the relationship was formalised by the signing of a declaration by the mayors of the two councils.

As well as organising activities this side of the Channel for Friends of Marcq that range from a summer boules competition and French Scrabble sessions to French classes for members, our association also works with Les Amis d’Ealing to arrange shared events such as an annual picnic that takes place in alternate years in France and England. Cultural weekends and walking weekends add variety to the mix of opportunities for members in Ealing to get to know and understand France and the French rather better, as well as for our friends in France to get to know us. 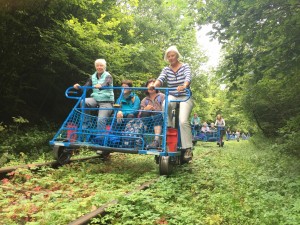 New activities or events will be displayed here.
Go to top